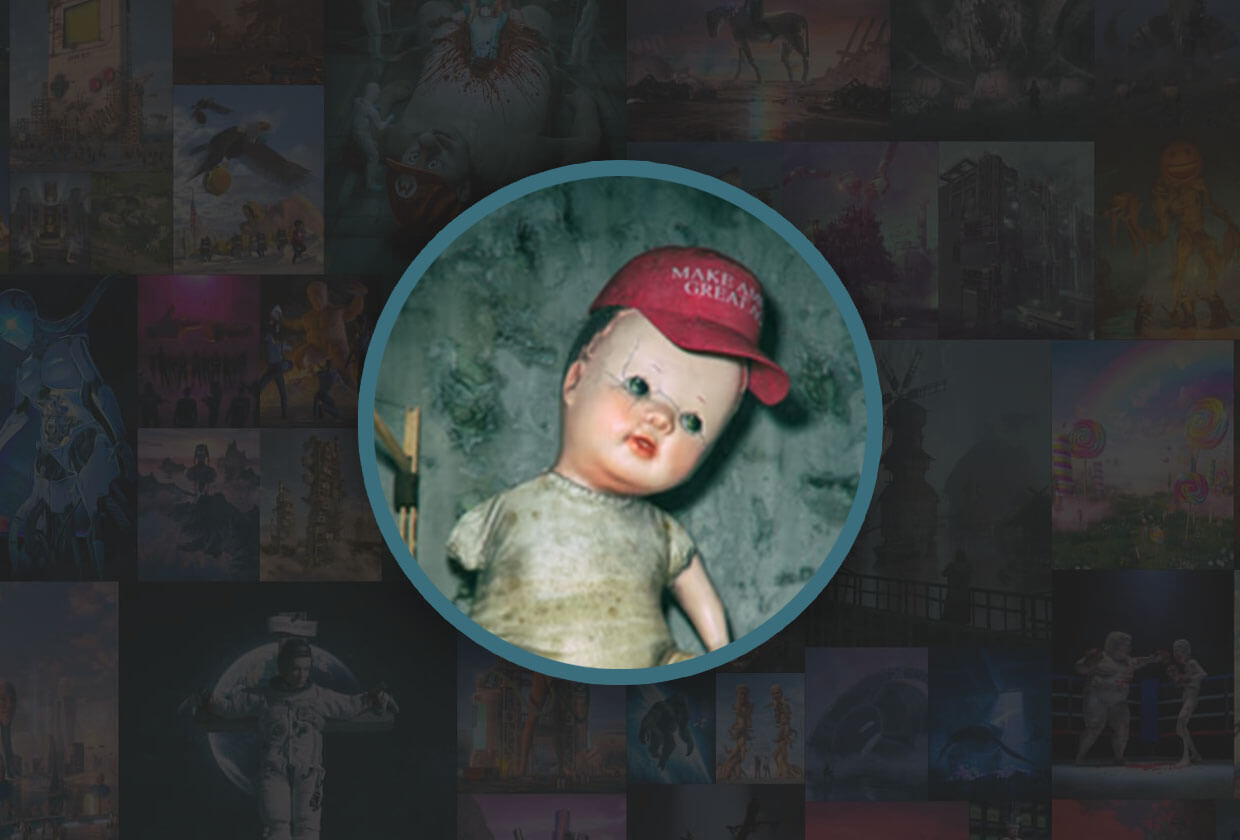 The complete guide to Beeple

Beeple is arguably the most well-known NFT artist in the world.

His works have sold for millions of dollars, and there’s no sign of the Beeple hype dropping off anytime soon.

But, who is Beeple and why are his NFTs worth so much money?

Let’s meet Beeple and explore the world that Beeple has created!

Beeple, real name Mike Winkelmann, is a graphic designer living in the USA.

He does a wide range of digital artwork, including the likes of short films, VJ loops, everydays and VR/AR pieces.

When he’s not working on his everydays, he does work for some of the biggest names in the world, such as SpaceX, Apple, Pepsi, Coca-Cola, Imagine Dragons, Nicki Minaj, Skrillex, Deadmau5 and Katy Perry.

Beeple started our sketching and hand-drawing, but has since moved on to more advanced computer tools.

He has a talent for using Cinema 4D, Photoshop, Illustrator and Octane Render.

Beeple began his everyday series back on May 1, 2011, and hasn’t missed a single day since.

He began selling his everydays as NFTs for $1 each, which were quickly snapped up.

After this, he combined the first 5,000 days’ worth of everydays and sold it at Christies for $69 million.

Beeple is well known for being down to earth and incredibly relaxed.

His descriptions on his NFTs often contain profanities and are incredibly relatable.

This helps to increase his profile and awareness as people feel that they can relate to him.

He carries this attitude and mannerisms into the interviews and talks that he gives.

What is a Beeple NFT?

A Beeple NFT is a piece of artwork or short video that Beeple has created and sold on an NFT marketplace.

These NFTs rose to fame when he sold a batch of his everydays for $1.

But now, Beeple commands a far higher price when he launches NFTs.

These NFTs are visually appealing and often incredibly controversial, but that’s what makes a Beeple NFT so exciting.

These NFTs are composed in Cinema 4D, Photoshop, Illustrator and Octane Render, giving them a futuristic look.

Beeple has an impressive range, going from politics and crypto to the planet and environment.

The Beeple NFTs cover just about every topic that you can imagine.

But, Beeple remains humble and sees his work as trash.

This is down to the fact that he spends around 3 hours per day making these everyday NFTs.

Nonetheless, the work is still incredible, and people snap up Beeple NFTs like hotcakes.

How are Beeple’s NFTs different from others?

It’s incredibly unique thanks to one incredible feature – you get a physical NFT box.

This came about when he was asked what makes his NFTs different from the art he posts on Instagram.

The physical NFT includes a digital frame that plays your NFT on repeat, a stylish case to store everything in and a holographic QR code that you can scan to reveal the current owner.

Currently, Beeple is the only NFT artist to offer this kind of service, and it’s a nice touch!

Can you use a Beeple NFT for anything?

Some NFTs give you access to unique content, some are characters for games, and some are just artwork.

Beeple’s NFTs are just artworks, unfortunately, meaning that you cannot race them or use them in games.

But, Beeple has tried his best to make his NFTs more usable than others on the market.

You can currently display your Beeple NFT in certain virtual worlds, such as Sominium.

Also, you get the physical NFT, meaning that you can display that in your home, office or entertainment area just like you could real art.

Beeple is making the art NFTs come to life and give them more purpose than ever before.

Some would even go as far as saying that Beeple is a pioneer in the art NFT space.

Beeple’s everyday range is without a doubt the most iconic NFT range the world has ever seen.

Quite simply, Beeple creates a new artwork every single day and he has done this since May 1, 2011.

He’s never missed a day and has no plans to stop this any time soon.

He began by selling these for $1 each on MakersPlace, where the site crashed due to the volume of traffic.

Beeple will pick a theme and then run with it for months, or even a whole year, with all of his everydays taking on this theme.

Typically, Beeple spends 3 hours a day making his everyday for that day.

He then combines these into collections and sells them as a run of 100.

Beeple’s most expensive NFT, The First 5,000 Days, was a combination of the first 5,000 days of his everydays.

This sold for $69 million and it’s likely that this would sell for a lot more money if it ever went up for sale again.

Beepke’s everydays are the most sought-after NFTs in the world right now.

What’s the most expensive Beeple NFT?

Determining the most expensive Beeple NFT is a little tricky as they’re exchanging hands all the time.

We’ve seen resales of Beeple NFTs fetch thousands of times the original sale price, but we’re going to focus on the price of NFTs sold by Beeple himself.

In this case, The First 5,000 Days takes the top spot, selling for $69 million at Christie’s auction house.

It was the first digital piece of art to ever sell at the auction house, breaking multiple records on the same day.

The resale market is incredibly strong, however.

A lot of Beeple’s $1 drop of NFTs are selling for tens of thousands of dollars, which is an incredible markup.

How can you buy a Beeple NFT?

If you want to buy a Beeple NFT, you’ll either need deep pockets or to be incredibly fast.

Beeple drops his latest NFTs through his collection portal, where you can log in and place bids.

But due to the popularity of his work, these are all snapped up pretty quickly.

If you’re not fortunate enough to get your hands on one of these, you’ll have to head to the various NFT marketplaces.

On these marketplaces you’ll end up paying a lot more money for the same NFT, but a Beeple is worth the cost.

Think of buying a Beeple like buying tickets to see your favorite band.

If you’re not on the website at the right time, all the tickets will be sold out and you’re left looking for tickets from scalpers.

Beeple is one of the most popular NFT artists in the world, so you can expect high competition.

NiftyGateway and OpenSea often get Beeple NFTs up for sale, but they’re at a greatly inflated price.

So, either you’ve got to have a quick trigger finger or be happy to pony up a small fortune if you want to buy a Beeple NFT.

Beeple is the hottest NFT artist around!

Beeple is without a doubt the hottest NFT artist around at the moment.

He’s the 3rd most expensive living artist in the world as well.

This is a massive feat and as time goes on, he’s only going to improve on that record.

Beeple’s are the most sought after NFTs in the world, with people dropping millions of dollars to get one.

His art style and humility help him stand out as a fantastic artist, even if his artwork is controversial.

Nothing is off limits for Beeple, and we’re excited to see where this attitude takes him going forwards!