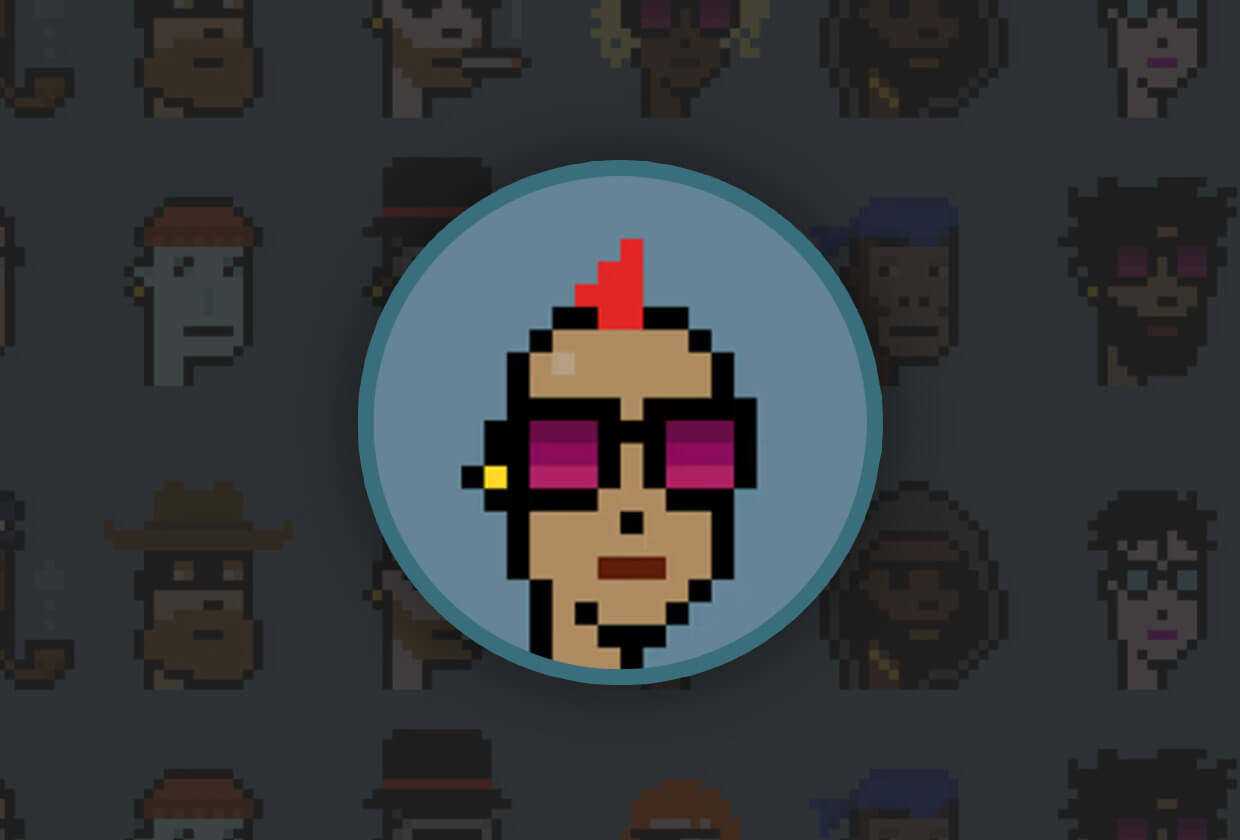 The complete guide to CryptoPunks

CryptoPunks are regarded as one of the first NFTs to land on the Ethereum blockchain.

As a result, CryptoPunks are the most sought-after NFTs and fetch hundreds of thousands when they hit the auctions.

But what are CryptoPunks NFTs and when did they come around?

We’re going to teach you everything there is to know about CryptoPunks, including where you can buy some!

CryptoPunks were randomly generated by a bunch of code way back in 2017.

This created 10,000 unique CryptoPunks that you see in circulation today.

They gave away 9,000 CryptoPunks for free…

Anyone with an Ethereum address could claim a CryptoPunk, and 9,000 lucky folks did just this.

But, there is a slight issue with CryptoPunks and their origin story – they were created before ERC-721 tokens existed.

This means that they’re ERC-20 tokens.

At the moment, NFT marketplaces only support ERC-721 tokens, meaning that they cannot naturally trade like other NFTs.

So, LarvaLabs allows you to buy and sell CryptoPunks directly from their website.

You can wrap CryptoPunks into ERC-721 if you really want to sell them on another NFT marketplace, but it’s not efficient and is a bit of a nightmare.

CryptoPunks are seen as the OG NFTs due to the fact that they were created before the ERC-721 standard, and that’s a pretty good reason to consider them the OGs.

Each CryptoPunk is totally unique, but they share various attributes.

The less attributes a CryptoPunk has, the more valuable they are.

The same goes for Punks with 7 traits.

So, let’s explore CryptoPunk traits and what they mean for the value of a CryptoPunk!

What are CryptoPunk traits?

This can get rather nuanced, so we’re going to try and make this as simple to understand as possible – we promise!

Every CryptoPunk NFT has what’s known as traits.

CryptoPunks can have up to 7 traits, but they can have as few as 0.

These are all randomly generated, so you can’t customize your own CryptoPunk.

There are 4 different species of Punk, and each species has a different number in existence.

As you can see, the fewer the Punks of a certain species, the more valuable the Punk is.

Then you have all of the other traits that are available.

There are hundreds of traits that range from moles and beanies to buck teeth and a top hat.

These can appear in any random combination, but some traits are gender specific.

Why does this happen?

It was pure randomness from the code LarvaLabs created.

Generally speaking, those with 1 or 6 traits tend to be the most valuable, but it depends on the traits as some are more common than others.

And that brings us on to the next part, how the combination of traits impact the CryptoPunks’s value.

So, now you know the basics of the traits from the CryptoPunk NFT world, it’s time to explain how different traits impact the price.

Each trait occurs a number of times, and this was randomized when the punks were created.

For example, there are only 44 CryptoPunks with beanies, but there are 2,459 with earrings.

So, a CryptoPunk with a beanie is more valuable than a Punk with an earring as it’s a scarcer trait.

As we already mentioned, the number of traits on a Punk also has an impact on a price.

Let’s take a look at that right now.

In the case of the Punk with 7 traits, it’s the only one in existence.

If this was sold today, it would easily fetch more than $10 million.

So, as you can see, the top and bottom ends of the trait count tend to be worth the most money to collectors.

How can you trade CryptoPunks?

As we mentioned earlier, CryptoPunks were created well before ERC-721 tokens were invented.

So, you have to head on over to LarvaLabs to be able to trade them.

Each CryptoPunk has its own page and you can search based on number of traits, traits and race.

This gives you a quick and easy way to find all the punks that fit your taste, which is arguably easier than using one of the NFT marketplaces.

However, there is one trick you can use, but it’s a bit of a fiddle and nuisance, so it’s not recommended.

But, if you want to go through the hassle of wrapping your CryptoPunk, we’ll give you a quick walkthrough.

You’ll need to use a wrapping tool in order for this to work.

What you do is send your Punk to the wrapped contract where it’ll sit in a sort of escrow wallet.

In return, you’ll be given an ERC-721 which you can then trade like all other NFTs on a marketplace.

Then, when the new owner wants to redeem the ERC-20 punk, they unwrap the token by sending the ERC-721 token to the wrapped contract.

The ERC-721 token is then burnt and the ERC-20 token is sent to the owner.

This is a pretty cool concept as it allows for people to use NFTs in the DeFi space, but that’s a whole different kettle of fish.

What is a Dev Punk?

Remember when we said that the developers kept the first 1,000 CryptoPunks for themselves?

Well, these are dev punks!

These are ultra-rare Punks and they sell for a fortune.

You can identify a Dev Punk by its serial number.

Any CryptoPunk with a number less than 1,000 is a Dev Punk.

These don’t come up for sale often, but when they do they’re snapped up quickly.

Given that it has 3 traits which are all average scarcity, it’s safe to say that it traded at well over fair market value.

Dev Punks are hard to find in the wild, so when one goes up for sale, you best move quickly!

What was the most expensive CryptoPunk?

CryptoPunks is possibly the best rags to riches story in the NFT world, with people making millions of dollars from these free NFTs.

It’s 1 of 9 alien punks and features a medical mask, which thanks to the COVID-19 pandemic made this Punk even more desirable.

People go so crazy for CryptoPunks that 6 of the top 15 most expensive NFTs in history are Punks.

As time goes on and we see more rare and super rare CryptoPunks hitting marketplaces, we’ll see all sorts of records broken.

Where can I find CryptoPunks for sale?

Thanks to the complexities of Ethereum and the fact that CryptoPunks are ERC-20 tokens, getting your hands on a Punk can be a bit tricky.

If you want to buy a CryptoPunk, you’ll need to head directly to the LarvaLabs website.

From there, you can browse every single Punk ever created and place a bid on them, even if they’re not for sale.

If the owner likes the bid, you may be able to tempt them into parting with their Punk.

But, if you want to buy a Punk that is actually for sale, you can head to the section where there are just Punks for sale.

There’s generally a good selection on sale at any given time, but you’ll need to prepare to open your wallet.

The cheapest punk is currently sitting at $384,540, so you might need to sell your house.

From time to time you may also find CryptoPunks for sale at other NFT marketplaces.

No, these aren’t fakes or scams, they’re wrapped NFTs.

Wrapping is the only way that you can get a Punk onto a regular NFT marketplace.

If you do buy one of these, all you have to do to unwrap the Punk is to send your ERC-721 back to the wrapping contract and you’ll get the original ERC-20 NFT in your wallet seconds later.

How to buy CryptoPunks?

Once you’ve found a CryptoPunk for sale, you’ll want to make sure that you’ve got enough funds in your wallet.

You can transfer Ethereum to your wallet of choice just like you would with any other transaction.

You then need to pair your wallet with the marketplace of choice.

For LarvaLabs, as this is where 99% of all CryptoPunk trades take place, you need to use MetaMask.

Once you load up the LarvaLabs website, you’ll get a notification asking if you want to pair your wallet with the site.

The option is yours.

Confirm the transaction fee and if the bid is accepted, the Punk will appear in your wallet moments later.

CryptoPunks are the OG NFTs!

It’s without a doubt that CryptoPunk NFTs are the OG in the space.

They’re so old that they predate the ERC-721 standard, certifying their OG status.

If you want to stand out from the crowd and look like the king or queen of the crypto world, then you need a CryptoPunk in your collection.

There are plenty to choose from, so pick wisely!