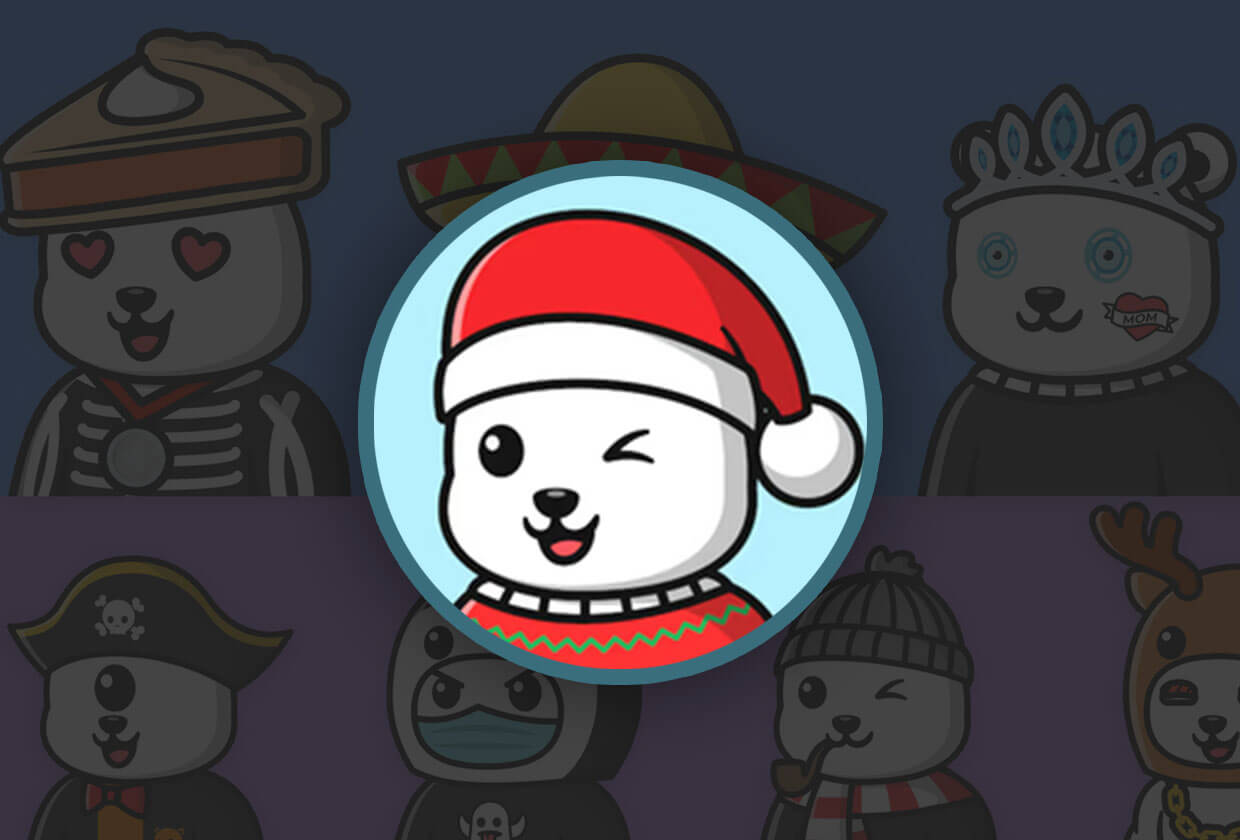 The complete guide to Winter Bears

The collection launched in September 2021 and sold out within hours.

Winter Bears are still yet to really explode in price, but they’re starting to gain momentum.

With a strong pipeline of ideas and additional generations preparing for launch, Winter Bears are going to quickly become the hottest bear themed NFTs around.

So, let’s dive into the world of Winter Bears and learn what they’re all about!

What are Winter Bears?

Winter Bears is an NFT collection brought to you by a team of 3 experienced decentralized finance (DeFi) creators.

Winter Bears are inspired by polar bears, and as a result, a portion of the profits generated from the minting of Winter Bears will go to a charity that looks at helping polar bears.

Exactly 10,000 Winter Bears were minted in Generation 1, selling out in just a few hours.

Winter Bears come in 5 tiers of rarity and are made up of a little more than 150 unique traits.

Owing to the small number of traits in the trait pool, you will find the rarer Winter Bears sharing items with a lot more other Winter Bears than you would in other collections.

This is likely the reason behind the fact that we’ve not seen the price of Winter Bears explode following minting.

Nonetheless, Winter Bears are still a cute addition to the NFT world.

Let’s take a look at those traits!

What are Winter Bears traits?

All NFT collections have traits, and Winter Bears is no exception to the rule.

Winter Bears doesn’t specify exactly how many traits there are, simply stating over 150.

Spread out over 10,000 Winter Bears, that doesn’t give much room for uniqueness.

This means that we do see a lot of the Winter Bears from the rarer tiers sharing a good deal of their traits.

This is down to the fact that to be rare, they must have rare traits.

With the small number of traits available, all the rare traits are the same.

Amazingly, there are no 2 Winter Bears that are the same, there are just a lot that look incredibly similar.

These traits are split into the following categories:

The 2 accessories that are available, face and neck, are not common at all.

Let’s look at how trait combinations can impact the price of Winter Bears.

Ok, we know that there aren’t too many traits available for the Winter Bears collection.

But how does that impact the value of each Winter Bear?

Well, so far, it looks like it’s having a major impact on the price, with the price floor remaining incredibly low.

The current price floor for Winter Bears is 0.187 ETH, and that’s just over a month after launch.

To put this into perspective, other collections that minted for around the same price now have a price floor of just over 7ETH.

This is because there’s more uniqueness to each of those NFTs.

Sharing a trait with 20% of all other Winter Bears isn’t going to make your NFT valuable.

This Winter Bear has 6 traits, one of which is Aurora, which signifies that this is one of the rarest Winter Bears that you can get.

The Aurora trait is shared by 9% of other Winter Bears, which considering it signifies the rarest Winter Bears, that’s a little high.

It also has no neck accessory, which 64% of other Winter Bears also have, and it has no face accessory, a trait of 27% of other bears.

Winter Bear #2918 does however have 2 traits that are what we’d consider rare.

Those 2 traits alone have given this Winter Bear its value.

So, the combination of traits doesn’t give a Winter Bear any value, nor does the classification of its trait levels.

As always, it’s the traits that are shared with fewer than 1% of other NFTs from the collection that drive the price of Winter Bears.

In fact, the 2 most expensive Winter Bears currently for sale are both unique bears and share their traits with no other Winter Bear.

This in turn highlights that Winter Bears are really capped in price potential as just so many Winter Bears share the same traits.

How can you trade Winter Bears?

Now that you know a good deal about Winter Bears, it’s time to learn how you can trade Winter Bears as well.

In order to trade Winter Bears, you’ll need to have a Winter Bear in your wallet already.

So, if you don’t already have one, then you’ll have to head to either OpenSea or Nifty Gateway, as these are the only NFT marketplaces that currently have Winter Bears for sale.

Once there, you’ll need to pair your wallet of choice, with MetaMask being the best option.

Then you can opt to place a bid or pay the seller’s asking price for a particular Winter Bears NFT.

The best time to place a bid is when the Winter Bear is for sale for well above the floor price.

This gives the seller a carrot and they might get tempted to accept your bid, acknowledging that their price target is far too high.

However, if the Winter Bear is on or below the floor price, it’s probably a poor idea to bid.

Other people will also be bidding on these to get the best price possible, and the bidding can take the Winter Bear up to a price that’s not favourable for you.

In these cases, opting to buy at the seller’s target price is the best option.

This also goes for rare Winter Bears that are undervalued.

Let’s say there’s a Winter Bear up for sale for 8 ETH and it has 3 traits that are seen on less than 1% of other Winter Bears.

This would be a great buy opportunity as we’ve seen Winter Bears with fewer scarce traits sell for more.

Then do the opposite when it comes to selling.

Accept higher bids and sell for a reasonable price.

Now you know how to accurately work out the true value of a Winter Bear, you can ask for the correct amount for your Winter Bear NFTs.

You’ll need to trade Winter Bears on either OpenSea or Nifty Gateway as they are the only 2 NFT gateways that currently list the Winter Bears collection.

What was the most expensive Winter Bear?

There has been a lot of trade volume with the Winter Bears NFT collection.

But only a few stand out as really valuable for the time being.

The most expensive Winter Bear that ever sold was Winter Bear #1178, which sold for 15 ETH.

It’s a unique Winter Bear with all of its traits being 1 of 1.

That’s a very reasonable price for a 1 of 1 NFT from the Winter Bears collection.

But, some other sellers don’t quite have everything so figured out.

These Winter Bears will never be sold for that price, and they’re not even special Winter Bears.

These are all fairly common Winter Bears with common traits.

There are many Winter Bears that are wildly overpriced such as these.

Given the issue with the lack of traits, demanding the GDP of the Western Hemisphere for a Winter Bear is a bold move.

Where can I find Winter Bears for sale?

Winter Bears have all been minted now, meaning the only way to get a Winter Bear is to buy one.

All Winter Bears are listed at OpenSea and some are also listed at Nifty Gateway.

These are your 2 best bets if you want to buy a Winter Bear, so head on over there.

Be aware though, that there are a lot of Winter Bears currently up for sale on both of these marketplaces at ridiculously high prices.

How to buy Winter Bears?

Let’s say that you’ve found a Winter Bear that you want to buy.

It’s not overpriced and it’s got just the right balance of traits to make it special.

Or perhaps you just love how it looks and you want a cool new display picture.

You know it’s time to pull the trigger and buy that Winter Bear.

To begin, you need to make sure that you’ve got enough Ethereum in your wallet.

Ideally this wallet is also MetaMask.

Remember that you need to have enough for the Winter Bear and to cover the gas fees, which are still fairly high.

You can opt to buy the Winter Bear of your dreams when gas fees are lower, which is often during the night for Americans.

Once you’re all set to go, connect your wallet to the NFT marketplace and then head to the Winter Bear that you want to buy.

Hit buy, or place your bid value, and submit it.

Confirm the transaction in your wallet and then you wait.

Within a few minutes the Winter Bear will be in your wallet and ready for you to use.

Once you buy a Winter Bear, you can use it for anything you wish.

Whether that’s a new LinkedIn profile picture, a Twitter profile picture or perhaps you want to get a tattoo of your Winter Bear, it’s all up to you.

Winter Bears come with a non-exclusive license, so you have total freedom to do what you want with it.

A lot of NFT collections are now giving money to charity, which is a fantastic use of the funds collected from minting.

Winter Bears was no exception to the rule, donating $40,000 to 2 charities.

There’s a solid roadmap in place and plenty more collections coming to the Winter Bears universe.

There’s even a pixelated range in the works which will be ported to various metaverses.

While Winter Bears themselves might not be too valuable owing to the lack of traits, they are fun and there’s lots of potential for the project moving forwards.